I recently had the opportunity to partner with a non-profit organization that provides food and shelter to the homeless population in the local area. It was my first time applying the principles and tools of continuous improvement to the non-profit world, and I was amazed to discover how well the concepts transferred outside of traditional business applications.

During the initial assessment with the executive director and shelter operations manager, we determined that there was a critical need to standardize and document the daily homeless shelter operations process. This was important because it would help ensure a consistent experience for the shelter guests, who often have very little stability in their lives outside of the shelter.

Just like in business, I needed to ‘go-and-see’ the process so that I could better understand the current situation. I visited the shelter and spent several hours talking with the staff and observing the operations. It was clear that everyone who worked at the shelter was committed to providing the best service to the guests; however, there was some chaos and confusion at times. What was interesting was that some of the regular volunteers working there had identified some ways to make the process flow more smoothly. For example, the volunteer who handed out towels to the guests developed a simple kanban system to ensure he never ran out of towels. There was a tremendous opportunity to identify best known practices like these and standardize them.

Once I had clarity on the goals and current process, it was time to form the team. We had representation from every functional role in the shelter operations. After communicating the intent and scope, I facilitated a 2-day workshop with the team to build the standard operating procedure.

We began by building and aligning on the shared vision and scope of the workshop:

It was important that the team understand how having a standard operating procedure would help ensure consistent results. To do this, I had them do an activity where each team member built a paper airplane in silence with no work instructions. Then, they built a second airplane. This time, they had clear step-by-step work instructions and were allowed to talk to and help each other build the airplanes.

The picture below shows the difference in results between the first round of airplanes (multi-colored airplanes) and the second (white airplanes):

Now that the team had a better understanding of the benefits of standardization and documentation, it was time to build the shelter operating procedure. We began by mapping out the processes for shelter operations, including special situations. It was interesting to me to see that, just like in the corporate world, there was variation and conflict on the ‘best way’ to perform tasks. The team worked through the conflict and aligned on one procedure, as shown in the following process map: 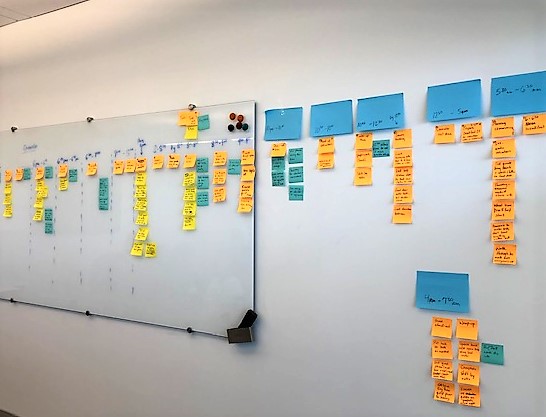 We then divided up into smaller teams who were each tasked transferred with transferring the process into electronic documentation. They also added ‘key points’ to process steps to help explain the ‘why’ behind each task. When each team was done, we regrouped and reviewed, adjusted, and aligned on each procedure.

By the end of the two-day workshop, the team had made incredible progress on what had seemed like a daunting task. About 75% of the documentation was complete. We identified the remaining actions to complete the standard operating procedure and assigned owners and due dates.

A month after the workshop, we had a follow-up meeting to review progress and for me to provide feedback. I could not believe how much the team had completed since the workshop. The team had completed the first draft of the shelter operating procedure and were very excited about the results. They clearly saw the benefit of standardizing the work among the current staff members and having clear documentation with which to train new employees and volunteers. The executive director, who was the sponsor of the project, was very pleased with the results

The project was a success. I was pleasantly surprised to learn that not only were the principles and tools of continuous improvement just as applicable to a non-profit organization, but it was actually easier than applying it to more traditional industry. I attribute this to the passion and commitment from the team to provide the best services for the shelter guests.

This experience proves that there is a tremendous opportunity to help non-profits maximize their impact through continuous improvement.

2 thoughts on “Building Standard Operating Procedures for a Homeless Shelter”